Rabbits are a common problem in rural areas of Sussex. To remove your rabbit problem, we offer an environmentally friendly rabbit control service. 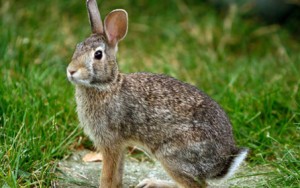 Rabbits are one of Britain’s most widespread and destructive agricultural vertebrate pests. The impact of rabbits on native plants includes damage to vegetation through ringbarking, grazing and browsing. Rabbits also prevent regeneration of native plants by eating seedlings. As well as causing detrimental habitat change, rabbits threaten native mammals through direct competition for food and shelter. Overgrazing by rabbits removes plant cover and can contributes to soil erosion. Rabbits cause changes in the quality of flora and habitat of fauna.

The European Rabbit (oryctolagus cuniculus) causes an estimated economic loss (primarily agriculture) in excess of £100 million a year. Although hard to quantify the total population is thought to be around 40 million. The population is currently increasing by 2% annually due to mild winters, fewer outbreaks of myxomatosis.

Rabbit populations can with stand high mortality from natural causes so, coupled with their inherit capacity for population increase, complete eradication is impractical. Instead, the aim should be to reduce numbers to economically or practically acceptable levels.

Long term rabbit population management should aim to reduce levels at which their damage is reduced to an acceptable level.

The most effective time to mount a rabbit control program is between November and March because:

The best results are achieved if infested adjoining land is treated at the same time in co-operation exercises. Rabbits do not respect boundaries.

Habitat management plays a vital part of a successful control program. Scrub and ground cover may need to be thinned to allow access to burrows – and is essential when gassing takes place.

Gassing is regarded as the best control method when burrows are accessible and can offer up to 80% control. For best results rabbits are driven to ground before gassing and every entrance to the warren system is found and treated.

Bailey Pest Solutions pays particular care to ensure that no badger sets or fox earths as situated near the warrens being treated.

Phostoxin and Talunex are the products that are available. Both are extremely toxic to rabbits.

Fencing is particularly useful when other techniques are impractical, or when complete exclusion is the aim. Rabbit-proof netting fences are often initially used in specific circumstances such as the protection of relatively small, high-value enterprises, rather than extensive grazing enterprises.

Rabbit proof fencing is a one-off operation and should last for up to 20 years where maintenance is adequate.

Netting fencing may be judged to be a cost effective long term control method when compared with current costs of ongoing rabbit control works in residential areas. It may be the only effective rabbit control option to contain rabbits in difficult terrain or in situations where rabbit control by other techniques is difficult.

Controlling the movement of rabbits with netted fencing is the first stage of making a property rabbit-free. 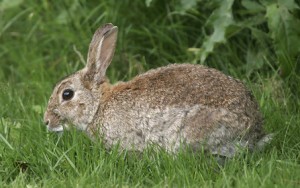 Another very productive method of rabbit control is the use of spring traps. In some situations it can be the best method of control. The most common spring trap used by Bailey Pest Solutions is the Mk6 Fenn trap. The one draw back is that at times it can be very labour intensive.

This method of rabbit control is best used mainly on small garden jobs. Here galvanised wire-mesh cages are baited with carrots set in open vegetation away from the burrows and are checked twice a day – morning and late afternoon. Captured rabbits are then dispatched humanly. It offers the advantage that access to burrows is not required and that if non-target species can be released unharmed.

Rabbit control using air rifle or .22 rimfire is anther highly affective method of clearing large numbers of rabbits. However single shooting operations are not particularly effective and reduce rabbit numbers by only 30%. The shooting method is only used as an addition to more effective methods, or to remove problem individuals that cannot be disposed of by other means.

Drop box traps are very useful on long term contract to control rabbits. Set on well used runs through rabbit proof fencing, they can prove deadly at catching rabbits. They are only used in long term control programs because they are permanently set in the ground. The traps themselves are made of galvanised metal and consist of a holding chamber (sunk into the ground) with a tunnel running across the top that contains a counter balance floor that tips the rabbit into the chamber below returning to the set position. After installation, the drop box rabbit trap is left in an unset position for a long period to allow rabbits to start using the tunnel with confidence. Once the rabbits are using the tunnel with confidence the lock can be taken off the counter balance and set. This method of rabbit control can produce excellent results. Sometimes 100 rabbits can be taken in a single night from a line of boxes however number decrease over time bring the rabbits down to an acceptable level.